WLTP How Does It Work? Will it Work? 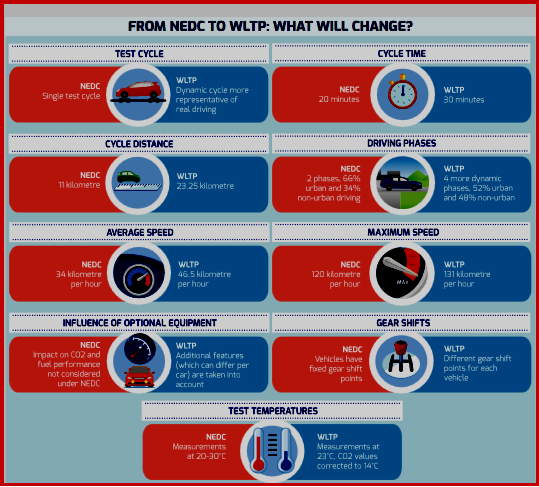 The old lab test – called the New European Driving Cycle (NEDC) – was designed in the 1980s and prone to cheating by automakers who designed for the test not real-world results. Due to evolution in technology – some of it programming used for cheating – and driving conditions, it became outdated.

After the scope of the Dieselgate scandal was revealed by American University and regulatory agency tests, an embarrassed European Union has developed a new test, called the Worldwide Harmonized Light Vehicle Test Procedure (WLTP).

The EU automobile industry facing ruinous fines and company-threatening legal actions and lawsuits – the negative financial effects are still ongoing – had no choice but to the shift to WLTP and for better or worse has actively contributed to the development of this new apparently more honest test cycle.

While the old NEDC test determined test values based on a theoretical driving profile, the WLTP cycle was developed using real-driving data, gathered from around the world. WLTP in theory represents everyday driving profiles an provides more truthful results.

The WLTP driving cycle is divided into four parts with different average speeds: low, medium, high and extra high. Each part contains a variety of driving phases, stops, acceleration and braking phases. For a certain car type, each powertrain configuration is tested with WLTP for the car’s lightest (most economical) and heaviest (least economical) versions.

WLTP was developed with the aim of being used as a global test cycle across different world regions, so pollutant and CO2 emissions as well as fuel consumption values would be comparable worldwide. However, while the WLTP has a common global ‘core,’ the European Union and other regions will apply the test in different ways depending on their road traffic laws and needs.

Some governments, of course, have used different standards to protect home markets from outside competition, a strategy tin a global economy that is slowly fading in significance.

4 Responses to WLTP How Does It Work? Will it Work?