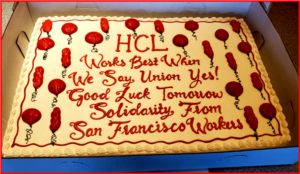 The United Steelworkers (USW) announced yesterday that they are welcoming around 80 tech workers employed by Google contractor HCL Technologies as new members. The HCL workers voted to join the union despite of a company-led anti-union campaign.

The workers, who are staffed at the tech giant’s Bakery Square office alongside Google employees are seeking a voice on the job and the opportunity to bargain over wages and working conditions.

“I’m honored that HCL workers chose to join our union and our fight on behalf of all working people,” said USW International President Thomas M. Conway. “They deserve to have their voices heard. Together, we’ll make sure that they are.”

HCL staged an anti-union campaign, which included mandatory meetings and the use of a controversial management consultant.

“Over the past few months, management has implied – and in some cases outright told us – that it’s better to just be quiet than fight for what’s right,” said HCL worker Johanne Rokholt. “We have proved that we are not willing to do that.”

The organizing effort began earlier this year through the Pittsburgh Association of Technical Professionals (PATP), a project sponsored by the USW.

The PATP’s primary goals include helping Pittsburgh and Southwestern Pennsylvania workers in high-tech fields connect and communicate with each other about their working conditions, as well as providing support in organizing and collective bargaining.

“We deserve more respect, dignity and democracy in our relationship with our employer,” said HCL worker Joshua Borden. “We fought for a seat at the table, and today we won. We look forward to bargaining a contract that reflects our important contributions to HCL’s continuing success.”

The USW represents 850,000 workers in North America employed in many industries that include metals, rubber, chemicals, paper, oil refining, the service and public sectors and higher education.