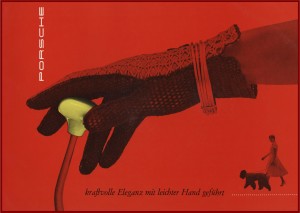 Typical of Porsche’s advertising during that era, the bold colors dominate, as do luxury cues.

Starting in early September the Porsche Museum will display the works the Stuttgart painter and graphic designer Hanns Lohrer (1912-1995) with an exhibit that goes beyond his automotive oeuvre. During the 1950s and ’60s, Lohrer played a vital role in the visual appearance of the Porsche brand in promotional pieces. Lohrer’s works helped create a positive image for what was then an upstart sports car manufacturer.

A selection of victory posters created by Lohrer at the close of every year to capture Porsche’s sporting successes is one area of focus at the exhibition. Another aspect of Porsche advertising is a series of posters by Lohrer created in 1961 depicting the Porsche 356 in the context of sports such as golfing, hunting or horse riding. Typical of Porsche’s advertising during that era, the bold colors of the sports equipment dominated the sports car, which was shown in small scale in the background.

In addition to the 40 posters, the Porsche Museum exhibition also includes a  sales brochure with artwork by Lohrer. The red cover of the 1958 356A catalog depicts a woman’s hand wearing a glove on the stick shift, with a poodle on its leash at the lower right – a recurring Lohrer luxury theme. These exhibition pieces will be supplemented by 30 original sketches and pictures of Lohrer’s other works.

The Porsche Museum is open Tuesday through Sunday from 9.00 a.m. to 6.00 p.m. Admission is €8.00 for adults, reduced admission is € 4.00. More information is available at www.porsche.com/museum.