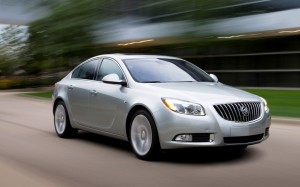 Reflecting the chaos and money shortages at the old GM when this platform was under development, this reborn Regal is a straight lift from Opel.Nevertheless it can work for Buick.

The Buick Regal now on sale is a rebadged Opel Insignia sport sedan, using Buick’s Chinese grille, and imported from Rüsselsheim, Germany. The Regal will be built at GM’s plant in Oshawa,Canada this spring. Confused yet? It’s a piecemeal rollout, indicative of the mix-‘n-match world car business that won’t be completed with the Regal until 2012, if then, since there’s room for derivatives and improvements.

In what’s also a sign of these global auto times, only four-cylinder engines will be offered in the Buick Regal, (Sorry, nail head V8 fans) but an optional 2-liter, albeit four-cylinder, engine provides more power than Japanese V6 engines in this mid-size class, boasts Buick marketers. This is an attempt to divert attention from Buick’s previous strengths in large engines, now irrelevant because of fuel economy regulations, and $4 a squirt gasoline when the car was under development originally as a Saturn. With Japanese customer conquest rates that are historically low for any Detroit offerings, let alone moribund Buick, calling the Japanese “competitors” is more a marketing wish than showroom reality, bordering on invidious comparison.

Buick Regal sales since a late summer U.S. introduction – 9,000 to date – and 2,000 sales in November are a start, but honestly more time is needed to see if the sedan is an enduring success at the GM division that U.S. Treasury Department officials wanted to kill during GM’s forced and well earned bankruptcy and subsequent rorganization. 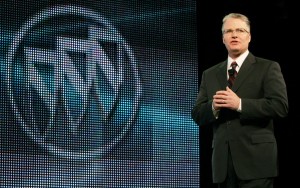 “Most impressively, 40% of Regal buyers are coming from non-GM brands and 28% are coming from imports,” said Brian Sweeney, U.S. vice president of Buick & GMC Sales and Service in defense of this decidedly underdog brand.

Buick Regal comes with a standard 2.4-liter engine — the same engine offered in the larger, more expensive Buick LaCrosse. It’s rated at a decent 182 horsepower and 172 lb.-ft. of torque, so “only fours” might be an outdated criticism on my part, but the car is heavy for four cylinder mills, no matter how high tech.

This makes the naturally-aspirated Buick CSX a mid-eight-second sprinter to 60 mph. It’s rated at 19 mpg EPA city cycle 30 mpg highway, 23 combined. (Tsk, tsk here as GM promised the media more than 20 mpg – another GM fantasy that Treasury found pervasive or the vagaries of the test cycle?)

The optional forced-fed 2-liter turbo – 220 horsepower and 258 lb.-ft. of torque – makes this version of the CSX, a mid-seven-second zero-to-60 mph car. It’s due on sale about now, but EPA hasn’t posted its ratings yet. (And I haven’t driven it.)

Compared with the LaCrosse that successfully preceded it to market, Regal is six inches shorter at 190, with four inches subtracted from the wheelbase, down to 108 inches. Regal is also an inch narrower and a few inches lower.

This gives the car a good stance with nicely rounded corners and flowing lines. Unfortunately, the styling (unlike Cadillac, GM’s other – real? – luxury brand, which is globally distinctive) is derivative – a combination of German and Japanese cues. Particularly awkward is the so-called Bangle butt, derisively named after the, former, BMW designer who invented it, which — duckbill like — projects from the rear deck. To be fair, most of the Japanese also emulated it after it appeared.

Reflecting the chaos and money shortages at the old GM when this platform was under development, and when GM had too many brands to feed as it sped toward bankruptcy, this reborn Regal is a straight lift from Opel with an “off the shelf” oversize Chinese chrome grille, a market where Buick is thriving. An inventive or desperate solution – take your pick or maybe both?

Taken to the logical conclusion, this signals the end of American design at Buick as global economies of scale will force larger market tastes (China) on the smaller one (U.S.) if a recently revived and profitable GM stays on course. Welcome to the world car.

For the moment, the Regal chassis and suspension were developed in Germany. This means European tuning, which can be harsh and noisy on our dilapidated roads. The body structure is claimed to be one of the most rigid in the segment, and is approximately 25% stiffer than the previous ‘Merican done Regal. No argument here and the heft has some real advantages for ride –  until you get to the pump.

All four dampers are electronically controlled and continuously adapt within milliseconds to the prevailing road conditions, vehicle movements and individual driving style. Chassis settings are adjustable by the driver, with Normal, Tour and Sport settings.

IDCS allows the driver to choose between three different operating modes, which change the suspension settings, throttle response, shift pattern and steering sensitivity through the variable effort steering system. The three modes are:

The other major benefit claimed for IDCS is that it automatically adapts the performance settings to individual driving styles. If a driver begins to drive more aggressively, it will tighten the suspension and increase steering effort and change to a more aggressive throttle response. When the vehicle senses that the driver is doing relaxed cruising, it adjusts settings for rolling smoothness and comfort.

The Opel Insignia was the European Car of the Year for 2009 and has received more than 31 awards since. Buick Regal has a shot, most experts think a, long, long shot at North American Car of the Year this year, but this is one domestic model, er, European designed, er soon to be Canadian built offering that I view with cautious optimism.

Better, the 2012 Buick Regal GS due to appear the middle of next year has more turbo boost added to the 2-liter so that output grows to 255 horsepower and 295 lb.-ft. of torque. It will be quick and – potentially – a bargain. There’s also room for a coupe and a station wagon or crossover.

In the fiercely predatory global auto markets – as on the wild African plains – when the sun comes up every day, you better be running hard if you don’t want to be eaten. We’ll see how hard and how long this Buick Regal can run.