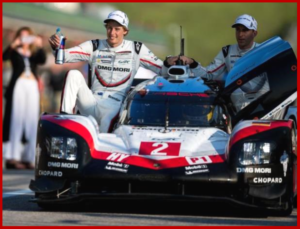 The result was the Porsche 919 Hybrid’s 17th race win and the seventh one-two victory since its debut in 2014. Porsche now has eleven fastest race laps to its tally. It’s trying to complete prototype’s career on top in its final season this year as Porsche withdraws for WEC following sister brand Audi as collateral damage in the spin-out and financial multi-car crash that is the ongoing Volkswagen diesel emissions fraud debacle.

Toyota once again teased; once again failed – a problem that might go away next year since it will likely be racing against itself in LMP1 – good for a Tokyo Aichi lobby trophy, but disastrous for the sport.  The TS050 Hybrids recovered from a dreadful qualifying session to pick up the pace, with the #8 of Sébastien Buemi, Stéphane Sarrazin and Kazuki Nakajima finishing third, 21.680secs behind the winning Porsche #2 after 1,058km of racing.  Mike Conway, Kamui Kobayashi and José María López in the #7 TS050 Hybrid raced fourth place as the Toyotas finished in the same order as they started. When the race began under the midday sun, both Toyotas attacked Porsche and at the end of the first lap Sébastien passed the #2 for second, with Mike taking third a few moments later.

It wasn’t as easy as it looked on the scoreboard. The sixth round of the FIA World Endurance Championship (WEC) was a hot six-hour race with up to 34-degree Celsius ambient temperature and 40-degree Celsius track temperatures (+93 F and a 104 F, respectively). The reigning world champion Neel Jani (CH), André Lotterer (DE) and Nick Tandy (GB) finished second. This trio had started from pole position and led for most of the race before tam orders let the sister car ahead in the closing stages because it is in a better position to take the championship. Jani achieved the fastest race lap in 1:47.149 minutes on lap 9 of 192.

Having won the top class at the Le Mans 24-Hours three years in a row, Porsche wants to achieve a third consecutive world contest title for manufacturers and drivers. Porsche has now scored 242 points in the manufacturers’ world championship with Toyota on 168.5 points.

In the drivers’ rankings, Bamber/Bernhard/Hartley (159 points) have extended their lead over the best placed Toyota drivers (108 points). Jani/Lotterer/Tandy lie fourth in the championship (90 points). Due to the excessive heat, the maximum consecutive time for a driver at the wheel was limited to 80 minutes by the regulations. Therefore, no double driving stints were possible. The 919 Hybrid could do 30 laps with one fuel fill which lasted approximately 57 minutes.

The seventh of nine WEC rounds will take place on October 15 in Fuji, Japan.