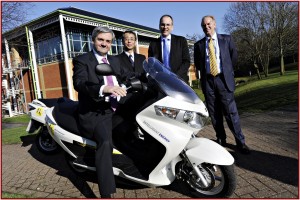 No estimates about the price for what remains ultra expensive space exploration technology.

This is said to be the first time any fuel cell motorcycle has achieved this level of certification, which means it could go on mass market sale since it deemed safe to use on public roads without having to be inspected and tested individually.

The upshot is that zero emission motorcycles are now a step closer to becoming commercially available, and since motorcycles don’t come in right-hand-drive versions, the motorcycle could – in theory – be produced and sold throughout Europe.

First exhibited at the 41st Tokyo Motor Show in October 2009, the so-called Suzuki Burgman Fuel Cell Scooter is equipped with the latest version of Intelligent Energy’s air-cooled hydrogen fuel cell system. The Suzuki Burgman has been participating in a UK public road testing program run by Intelligent Energy and the UK Government’s Technology Strategy Board.

The Burgman Fuel-Cell Scooter is based on Suzuki’s Burgman. It has a light, compact, air-cooled fuel cell and a hydrogen tank that’s positioned inside the frame. Electricity produced by the fuel cell powers a motor for propulsion; the only emission is water if you don’t take into account how the hydrogen is generated.

Suzuki says it is working toward commercializing the Burgman Fuel-Cell Scooter as a motorcycle with superior environmental performance. Suzuki aims to make eco-friendly fuel-cell scooters increasingly common in Europe in line with the establishment of hydrogen filling stations and other necessary infrastructure.

“Our aim is to make eco-friendly fuel cell scooters increasingly common in Europe, in line with the establishment of hydrogen filling stations and other necessary infrastructure.”

The city-friendly Suzuki Burgman Fuel Cell Scooter was jointly launched in Europe at London’s City Hall in February 2010. At the event, the Chair of the London Hydrogen Partnership and London’s Deputy Mayor for Policing, Kit Malthouse, hailed the zero emission scooter as a “fantastic piece of kit which shows how we can combat climate change.”

A fleet of the scooters will now undergo a further test program in various public road conditions at sites in the East Midlands and London.

“This is an important day in the history of fuel cell technology and a huge step towards cleaner, more efficient vehicles being part of the mainstream,” said Dr Henri Winand, CEO, Intelligent Energy.