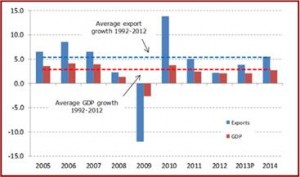 The World Trade Organization said today that trade growth fell to 2% in 2012, down from 5.2% in 2011, and is projected to remain sluggish in 2013 at around 3.3% as the economic slowdown in Europe continues to suppress global import demand.

WTO economists said that an abrupt deceleration of trade in 2012 was caused by slow growth in developed economies and “recurring bouts of uncertainty over the future of the Euro.”  Waning output and high unemployment in developed countries reduced imports and caused a lower pace of export growth in both developed and developing economies.

Improved economic prospects for the United States in 2013 should only partly offset the continued weakness in the European Union, whose economy is expected to remain flat or even contract slightly this year according to consensus estimates.

China’s growth should continue to outpace other leading economies, cushioning the slowdown, but exports will still be constrained by weak demand in Europe. As a result, 2013 “looks to be a near repeat of 2012, with both trade and output expanding slowly, below their long-term average rates.”  (See chart)

“The events of 2012 should serve as a reminder that the structural flaws in economies that were revealed by the economic crisis have not been fully addressed, despite important progress in some areas. Repairing these fissures needs to be the priority for 2013,” said Pascal Lamy, WTO General Director.

“Attempts by developed economies to strike a balance between short-term growth and increasingly binding fiscal constraints have produced uneven results to date, and finding an appropriate mix of policies has proven to be challenging. Similarly, the amount of progress that developing economies have made in reducing their reliance on external demand is still unclear,” Lamy said.

“As long as global economic weakness persists, protectionist pressure will build and could eventually become overwhelming. The threat of protectionism may be greater now than at any time since the start of the crisis, since other polices to restore growth have been tried and found wanting,” Lamy claimed.