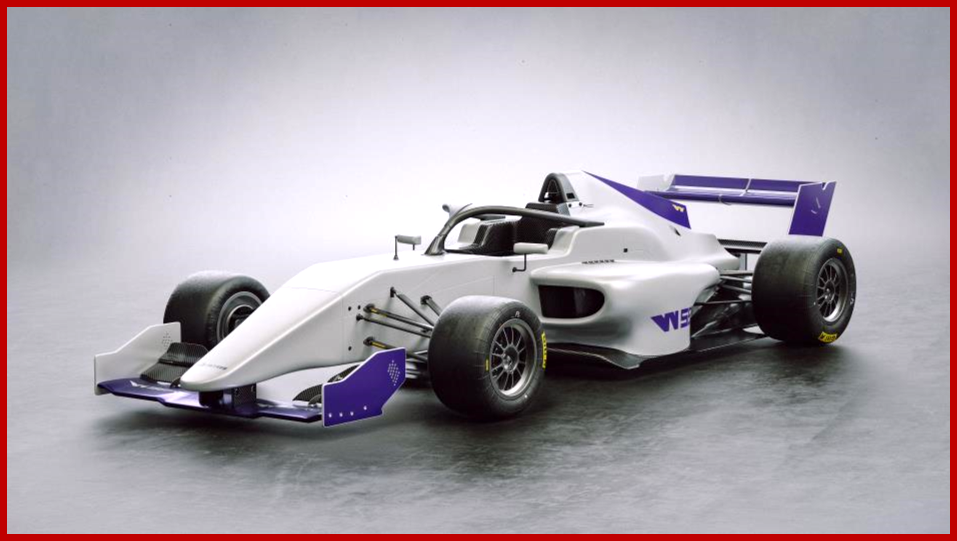 It will look better with some sponsorship decals.

It’s not as advertised above, but the so-called W Series, a new international women-only single-seater motor racing series, launches today. It’s stated goal is to entice the world’s best female drivers, and their sponsorship money to “fast-track women” to Formula 1, and, ultimately, find the world’s first female Formula 1 champion. It’s been two years in the making, and more news will follow.

The last woman to start a Formula 1 Grand Prix was Lella Lombardi more than 40 years ago in the 1974 British Grand Prix. The Italian female racing driver followed Maria Teresa de Filippis in 1958. There has never been a female Formula 1 Grand Prix race winner, but Lombardi scored points. She drove both Brabham and March versions of Ford Cosworth powered cars.

Gimmicky or not – and this could work at least as a business – racing remains one of the last sports dominated by men, not only behind the wheel but everywhere you look: in the pit-lane, garage, workshop, laboratory, and on mike.

W Series aims not only to promote female drivers but also to encourage “girls and women” into engineering and science careers and to promote STEM (science, technology, engineering and mathematics) subjects in schools, colleges and universities.

“This is a tremendously exciting time for motorsport in general and for women in particular, as we aim to bring the sport up to date and show the world just what women are really capable of,” said an admittedly self-interested Chief Executive Officer Catherine Bond Muir says. “Many sports in which women and men compete equally also run segregated events purely to increase the numbers of women who participate. Until now, motor racing has been the only sport in which there were no separate series for women.”

The new series, which begins in May next year, will have six races at circuits across Europe, including a round in the UK. The purse is $1.5 million. The British Racing & Sports Car Club (BRSCC) have been appointed by W Series as the organizing club.

The drivers will race spec cars – mechanically identical single-seater racing cars provided by W Series, powered by 1.8-liter turbocharged engines. The cars will have adjustable aerodynamics and slick tires. The cars will have a Formula 1-style ‘HALO’ safety device and, theoretically, will provide a high level of driver protection.

W Series is free to enter, but each driver will have to earn her place on the grid, via a variety of pre-selection programs, including simulator appraisals, fitness trials, media training of course, and on-track testing, trimming applicants to a total of just 20 for the season. Judges will include former Formula 1 racer David Coulthard, Formula 1 design engineer Adrian Newey, and an “experienced” Formula 1 team manager Dave Ryan.

“In order to be a successful racing driver, you have to be skilled, determined, competitive, brave and physically fit, but you don’t have to be a man,” said W Series’ David Coulthard, a multiple Formula 1 Grand Prix winner.

With a total prize fund of $1.5 million for its debut season (2019), W Series has claims to have already generated “great anticipation” among female racing drivers from many different disciplines, from Formula 3 and Formula 2 to GT, rally, NASCAR and Aussie V8 Supercars.

The combination of competitive cross-discipline drivers, fast, identical cars and Grand Prix circuits – to be announced – might provide interesting racing for fans everywhere. A TV contract – vital – so far is lacking

Away from the track, W Series also aims to raise the profile of STEM subjects among female students, and inspire future generations of engineers, technicians, aerodynamicists. Sponsorship money might appear here.