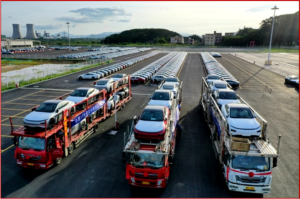 China is clearly moving forward on being a dominant player in high technology and emergent digital technologies.

The P7 claims cutting-edge autonomous vehicle and electric vehicle technology. On paper it’s formidable. P7 arrives as the Trump Administration is being outflanked in a trade war that Trump started and is losing.

China is clearly moving forward on being a dominant player in high technology and emergent digital technologies. The Commerce Department just said that imports from China, our biggest offshore supplier for more than a decade, actually rose from a 10-year low of $20.7 billion in March to $36.6 billion in May as trade virtually stopped here because of the COVID-19 plaque. Here too the Trump Administration failed to enact effective anti-virus policies as the current unchecked upsurge in in US Covid cases continues to increase rapidly.

Trump said he’d get tough on China. He didn’t get tough — he got played. Trump lost a trade war that he started. Farmers bankrupted. Steel workers betrayed. And manufacturing, in a recession. Donald Trump lost,” said presumptive president Joe Biden in a campaign ad.

“It can fairly be said that Trump started the trade war with China by ignoring World Trade Association rules regarding disputes among members, which require both parties to submit to a review of the alleged wrongdoing by a WTO panel of legal experts before taking any unilateral action of their own,” said Kent Jones, professor of economics at Babson College.

PZ EV sales quickly followed after receiving of an official Chinese production license on May 19th from China’s Ministry of Industry and Information Technology for its new wholly owned factory, the Zhaoqing Xpeng Motors Intelligent Industrial Park, in Xpeng’s home Guangdong Province. Production of the P7 at Xpeng’s plant is ramping up to meet demand, with an annual capacity of 100,000 units.   (AutoInformed.com – Xpeng Motors Gets Production License for Zhaoqing Factory)

“The customer delivery of our flagship P7 intelligent EV sports sedan – our second production model – is another testimony of our integrated capability, solidifying our position as a leading player in China’s smart EV market,” said He Xiaopeng, Chairman & CEO of Xpeng Motors, a Chinese electric vehicle and technology company that clearly is aiming at  Mercedes, BMW and Tesla customers.

The delivery of the P7 is the next step “to create an end-to-end in-house intelligent manufacturing ecosystem and value chain, from homegrown R&D and IP creation, through design and development, to manufacturing and rollout, complemented by direct as well as authorized sales network, after-sales services and customer support. This positions Xpeng well ahead of competition in China smart EV market,” it claimed.

The P7 is designed and built with four stated goals: Drive further. Charge quicker. Accelerate faster. Control smoother. It has already been well received by the Chinese public following a series of multi-city test drives over the past couple of months. Western media so far have not been able to test drive the P7. Its chassis has front double-wishbone and a rear five-link independent suspension.

At 706km NEDC, the rear-wheel drive super-long-range version of the P7 has the lengthiest driving range among production EVs in China. The P7’s in-house designed 3-in-1 electric drive system uses the most powerful permanent-magnet synchronous motor in China’s EV market, with maximum motor efficiency reaching 97.5%. It’s the world’s first to be equipped with the German Infineon 950 IGBT module.

Xpeng collaborated with CATL to develop the P7’s prismatic lithium NCM cells. As a result, the P7’s ultra-thin high-performance battery pack is only 110mm in height, reaching 170Wh/kg energy density to deliver close to 81kWh of power with a low drag coefficient of Cd 0.236 increasing the range.

Xpeng Motors is a Chinese electric vehicle company that designs and manufactures automobiles that are integrated with the Internet and use artificial intelligence. The company’s initial backers include its Chairman & CEO, He Xiaopeng, who is also the co-founder of UCWeb Inc. and a former Alibaba executive.

Established in 2014, Xpeng Motors has a senior management team with diverse backgrounds, including Co-founders Henry Xia and He Tao, both former senior executives at Guangzhou Auto with expertise in innovative automotive technology and R&D (Guangzhou has been affiliated with Fiat, Honda, Isuzu, Mitsubishi, and Toyota), and Vice Chairman & President Brian Gu, former Chairman of Asia Pacific Investment Banking at J.P. Morgan. It has received funding from strategic investors Alibaba Group and Xiaomi Corporation, as well as other prominent Chinese and international investors including IDG Capital, Morningside Venture Capital, GGV Capital and Primavera Capital.

The company launched its first production model, the G3 SUV, in Dec 2018, and will launch its second production model, the P7 electric sports sedan, in April 2020 with deliveries to Chinese customers in Q2 2020. Xpeng Motors is headquartered in Guangzhou, China with offices in Beijing, Shanghai, Silicon Valley and San Diego in the U.S. and manufacture centers in Zhengzhou and Zhaoqing.