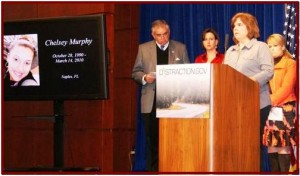 Kristin Murphy, whose daughter Chelsey, pregnant with her first child, was killed by a distracted driver while walking with the green light.

The U.S. Transportation Department said today that its latest survey shows young people are the least likely passengers to say something to their driver if he or she were texting or talking on a cell phone. DOT also launched a new contest for students to design a social networking icon that will be used in DOT’s distracted driving campaign and encourage young drivers to speak up when riding with a distracted driver.

The data show that younger drivers 18 to 20 years old report the highest level of phone involvement in crash or near-crash incidences. Findings came from what was said to be the first nationally representative survey on driver distraction conducted by DOT’s National Highway Traffic Safety Administration. The NHTSA survey polled more than 6,000 drivers to assess attitudes, knowledge, and self-reported behavior related to cell phones.

These young drivers are nearly three times as likely to report having been reading or sending a text or e-mail when such an incident occurred as compared to drivers age 25 and higher. In addition, drivers younger than 25 are two to three times more likely to drive while sending or reading a text message or email. Reports of texting while driving drop sharply as age increases, according to NHTSA.

When asked as passengers how they would feel about different situations, almost all respondents (~90% overall) reported that they considered a driver who was sending or reading text messages or e-mails as very unsafe.

Nevertheless, it also found that younger passengers were less likely than older passengers to speak up were. About one-third of young passengers 18 to 20 and 21 to 24 would say something to a driver who was talking on a handheld phone, whereas about half of drivers 65 and older would speak up.

In order to raise awareness among young drivers about the dangers of texting and cell phone use behind the wheel, DOT’s new Distracted Driving Design Challenge invites teens to create an original icon with an anti-distracted driving message that can be shared on Facebook, Twitter, Tumblr, and other social networking sites.

The contest, which will accept submissions from April 16 through July 31, is open to students between the ages of 13 and 18 in the United States. The winning design will be selected by Transportation Secretary Ray Secretary LaHood and a panel of DOT experts and incorporated into DOT’s distracted driving campaign.

The full survey analysis, “Young Drivers Report the Highest Level of Phone Involvement in Crash or Near-crash Incidences,” is available at NHTSA.gov. Full contest and submission details for the Distracted Driving Design Challenge are available at Distraction.gov and Challenge.gov.