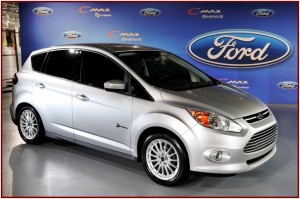 The C-MAX Hybrid is part of a dedicated family of electrified vehicles along with the C-MAX Energi Plug-in Hybrid.

Ford is issuing two safety recalls in North America, including a serious one for fires. On 2012-15 Ford Focus Electric, 2013-15 Ford Fusion Energi and 2013-15 Ford C-MAX Energi vehicles 50,000 120-volt convenience charge cords originally provided can cause a fire. Using the 120-volt charge cord originally provided with the affected vehicles with an AC outlet that is not on a dedicated circuit or is damaged, worn or corroded may result in increased temperature at the wall outlet and potentially lead to a fire. Ford admits that it is aware of “some fire reports.”

There are approximately 50,524 vehicles in North America with accompanying charge cords relating to this safety defect with 49,197 vehicles in the United States and its federalized territories and 1,327 in Canada. The Ford reference number for this recall is 18S24.

Owners will be notified by mail and reminded of the requirements for adequate wall outlets, and that extension cords should not be used under any circumstance to charge their vehicles. They will be instructed to take their vehicle to a Ford dealer to have the factory-equipped 120-volt convenience charge cord replaced with the latest version of the 120-volt convenience cord that includes a thermistor, free of charge as is required by U.S. law. The thermistor can identify over-temperature conditions at the plug/outlet interface and will discontinue charging until the temperature decreases to an appropriate level.

Ford is also issuing a recall for approximately 100 2018 Ford Edge, 2019 Ford Flex, 2018 Lincoln MKX and 2019 Lincoln MKT vehicles that may not have the power supply cable fastener properly secured to the alternator or to the starter motor. In the defective vehicles, if the nut used to fasten the power supply cable to the starter motor or alternator is not fully tightened or is cross threaded, the interface may not provide a secure connection. An improperly fastened power supply cable increases the potential for an electrical surge, which could lead to a fire.

Ford claims it is not aware of any fires, accidents or injuries related to this defect

There are approximately 87 vehicles in the United States and seven in Canada. The Ford reference number for this recall is 18S25.

Dealers will inspect the alternator and starter motor power supply cable nuts and studs for cross threading or damage and verify that the nuts are properly torqued using a torque wrench, at no charge to the customer as is required by law.