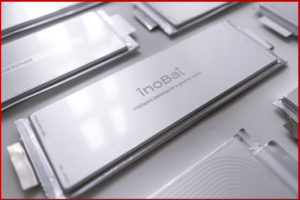 InoBat is backed by a consortium of investors.

The world’s first ‘intelligent’ electric vehicle battery was today revealed today by European EV battery producer, InoBat Auto (InoBat) by the company’s CEO, Marian Bocek*. Speaking at the GLOBSEC Tatra Summit 2020, Bocek claimed that after only a year of research and development, InoBat can now unveil the world’s first battery developed through a combination of Artificial Intelligence (AI) and High Throughput (HTP) technology.

InoBat’s technology-led approach to battery production – it’s claimed – enables them to create better batteries more quickly and efficiently, while delivering an increase in operational range for current best-in-class electric vehicles of almost 20%.  This technology enables InoBat to reduce its dependence on cobalt, in addition to also boosting energy density to a goal of 330 Wh/kg and 1,000 Wh/I by the end of 2023. What’s not clear is how InoBat can compete with major automakers, many of whom seeing selling their EV developed technologies to other companies as a way to offset costs and generate profits. GM’s Ultium battery business is just one example.

The largely unknown company is developing an AI-driven battery research center and production line in Voderady, Slovakia, which will begin producing its first intelligent batteries in 2021. InoBat is also promising to build a EUR €1 billion 10 GWh Gigafactory with the potential to provide 240,000 EVs with in 2025. The battery launch comes just days after former CEO Aston Martin and COO of Nissan, Dr. Andy Palmer joined InoBat as Non-Executive Vice Chairman.

InoBat aims to accelerate the rapid implementation of electro-mobility solutions in Europe, which “will increase the global competitiveness of the European economy and provide a long-term sustainable solution to the automotive market.”

InoBat is backed by a consortium of investors and technology companies, including lead investor IPM Group (IPM) – InfraTech asset managers who specialize in bringing ground-breaking technologies to Europe. Investors and partners  include CEZ (strategic investment of €10m in InoBat Auto), Matador, AEN, MSM Group, Across and Wildcat Discovery Technologies. InoBat has also recently announced a strategic partnership with global high-tech engineering company, Manz AG, who will supply the production equipment for the R&D center and production line, designed by architectural firm, Takenaka.

* Marian Bocek is a Co-Founder and Managing Partner at IPM and Co-Founder and CEO at InoBat, an R&D and battery production company with the long-term objective of serving the European market with new energy solutions. Marian has fifteen years of global banking and investing experience, having executed more than US$10b in private equity and investment banking transactions in the United States, Europe, Latin America, Africa, Asia and the Middle East. Prior to co-founding IPM, Marian was a director of InfraMed Infrastructure, one of the largest emerging market private equity infrastructure funds. He began his career at Lehman Brothers’ Global M&A/Investment Banking team in New York, which was taken over by Barclays Capital in 2008.