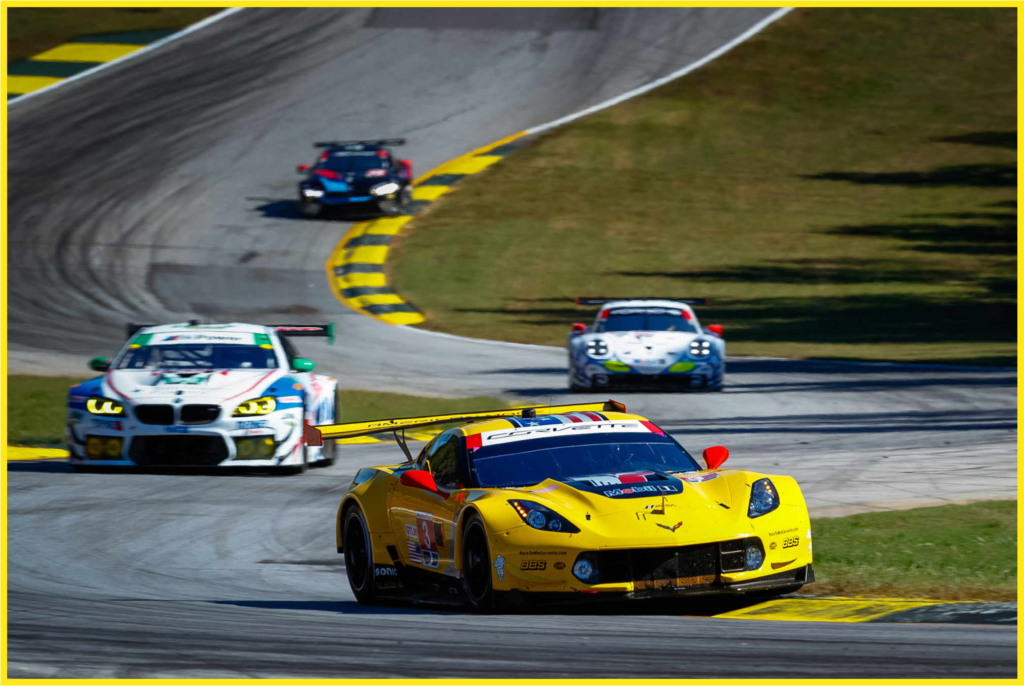 In a tough outing, Corvette Racing won its third consecutive IMSA WeatherTech SportsCar Championship  in the GT Le Mans (GTLM) class Saturday at the Motul Petit Le Mans run on Road Atlanta. By finishing eighth in the #3 Corvette, co-drivers Antonio Garcia and Jan Magnussen, joined at Road Atlanta by hired gun Marcel Fassler, defended their Drivers’ title from one year ago with an eighth-place finish. In racing’s version of tortoise and hare, it was Corvettes’ consistency over the season by constantly finishing in the points that proved a winning strategy.

It was the 13th team championship and 12th driver title for Corvette Racing in its 20-year history. The championship-winning#3 team managed to win the championship without scoring a win, riding a remarkable consistency that included eight podium finishes in 11 starts.

The real stars of the 10-hour race itself was a clear in-class win by the No. 911 Porsche GT Team Porsche 911 RSR and co-drivers Nick Tandy, Patrick Pilet and Frederic Makowiecki.

In the ‘luckless but fast category,’ a Chip Ganassi racing Ford GT put in a winning performance only to see the #3 Corvette sister car, the # 4 Corvette C7.R of Oliver Gavin, Tommy Milner and Fassler, hold off (looked to be legal at AutoInformed, and the stewards based on provisional results) the #67 Ford GT in the final hour to secure a second consecutive championship for the #3 Corvette team.

With a little over two-and-a-half hours remaining and the #3 Corvette was in contention for a race victory. However, Garcia spun exiting pit road and contacted the inside wall, forcing him to go behind the wall to make repairs. He returned to the track in ninth, three laps down, setting up a scenario where all the #67 Ford GT had to do was finish second or better to win the championship.

While in position to just that, Briscoe pitted  the # 67 From  from second with 48 minutes to go , but was beat back out onto track by the #4 Corvette. The Corvette finished  holding on to the second position while the #67 Ford GT fell to fifth in tough traffic and racing conditions.

Old pro Magnusson multiple race and world class PR champion in endurance racing,  spun it – so to speak- this way: “The way it turned out, the way the #4 car went in there and really put pressure on changed things around,” said Magnussen. “Such a massive team effort to make this happen (we used to car this in English TEAM ORDERS). I’m so proud to be a part of this. I think what really did it was the #4 car got sent super aggressively and changed the balance of things. Obviously the #4 car went for the win, (did it?) but they knew why they were doing it. It turned things in our favor.”

This was the first time since 2005 a team had won a championship without winning a race during the season. The runner-up effort for the #4 team, meanwhile, moved them up to third in the year-end standings.