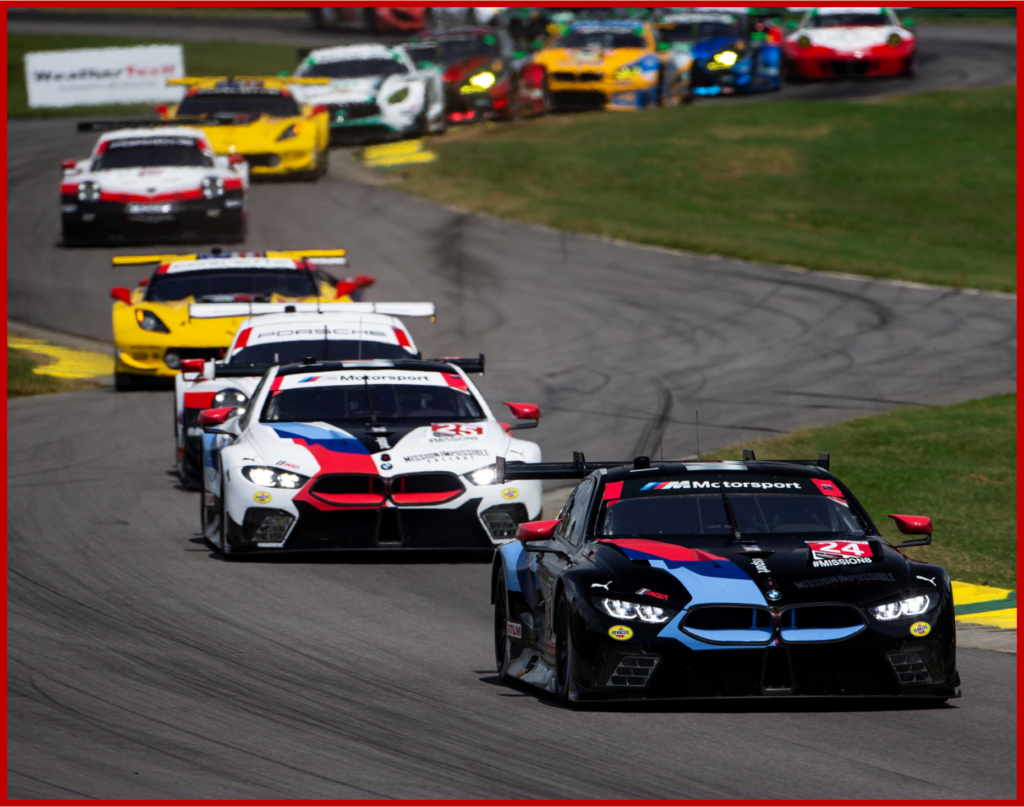 Racing doesn’t get any better. After nine races of the inaugural IMSA WeatherTech SportsCar Championship season of the BMW M8 GTE, BMW Team RLL posted its the first victory via a lucky or smart pit-stop strategy, and the first double podium finish for the all-new GT car at the Michelin GT Challenge at Virginia International Raceway. However, a strong run by Antonio Garcia and Jan Magnussen, drivers of the No. 3 Mobil 1/SiriusXM Chevrolet Corvette C7.R put them in the lead for the GTLM Driver’s Championship.

Ford Chip Ganassi Racing saw its GTLM winning streak stopped at four in the Michelin GT Challenge. No. 66 Ford GT co-drivers Joey Hand and Dirk Mueller finished fourth, while the No. 67 entry of Briscoe and Westbrook was forced to retire early from the race with clutch problems. Westbrook started the race from the pole position and led the first 28 laps before pitting to turn the car over to Briscoe, and the problem turned ugly shortly thereafter.

The No. 25 BMW M8 GTE, driven by Connor De Phillippi (USA) and Alexander Sims (GBR), completed 88 laps of the classic Virginia International Raceway two-hour-and-forty-minute race, winning with just a 1.323 second margin of victory over the relentlessly driven Corvette. The No. 24 BMW M8 GTE with John Edwards (USA) and Jesse Krohn (FIN) co-driving, finished a third, only 4.439 seconds behind their teammates.

“It was down to the last pit stop,” De Phillippi said. “Obviously, after the contact, we had to rethink what we were going to try to do. We went with a more aggressive strategy and we saw that if we stayed out longer we’d have a clear track and the others would be hitting the GTD traffic. We went forward with that strategy and with that we gained while they were stuck in traffic which was enough to keep us out front.”

“What an eventful race. Connor did a great job at the start to get us up to P3,” said Alexander Sims (No. 25 BMW M8). “I got in and raced past the Corvette, I tried to get by Dirk Müller, but I made a mistake, committed too much and lost control, unfortunately hitting a Lexus. We received a drive-through penalty which I thought was the right decision, it was my fault. At that point I thought the race was over but amazingly there was a safety car that brought us back into contention. From that point on, our pace was really good.”